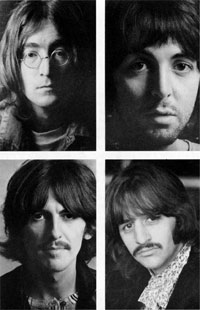 Released in 1968, much of the White Album, as it is known to most fans, was written while The Beatles were in India studying Transcendental Meditation with Maharishi Mahesh Yogi, and recorded during a time of growing tensions between the band members. The very diverse and eclectic mix of songs on the album is a result of the band members beginning to go their separate ways. In his book Beatlesongs John Dowlding describes the White Album as, “essentially Lennon, McCartney and Harrison taking turns recording their own songs and using the others as backing musicians.”

With the exception of a few tracks, most notably "Revolution 9", the White Album has far less production, experimentation and overdubs than what their earlier records such as Sgt. Pepper’s Lonely Hearts Club Band or Revolver.

One result of the growing tensions during recording sessions was that Ringo Starr decided that he had enough and quit the band one day. In his absence Paul McCartney filled in playing drums on some of the recordings. He was coaxed back a few weeks later, returning to find his drum kit covered with flowers. It was also during this time that John Lennon first started to bring Yoko Ono to recording sessions with him.

Interesting Facts about the White Album