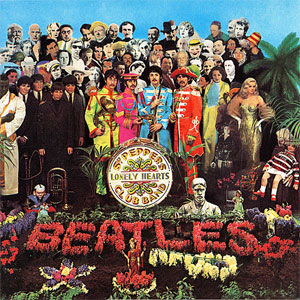 Released in June of 1967, at the beginning of the Summer of Love, Sgt. Pepper's Lonely Hearts Club Band has been labeled a landmark album ever since. The Beatles, Paul McCartney in particular, had been inspired by the music they heard on the Beach Boys album Pet Sounds and with Sgt. Pepper they intended to match or better it. The funny thing about it is that Brian Wilson of the Beach Boys was inspired to make Pet Sounds after hearing The Beatles' album Rubber Soul. In creating Sgt. Pepper they were not only pushing the boundaries of pop music but also the limits of the recording technology available during that time.

When The Beatles entered the studio to record Sgt. Pepper, they had given up touring so they could concentrate their creative efforts on making music in the studio. Paul McCartney's initial concept of the album was for The Beatles to play in the guise of Sgt. Pepper's band, however, according to John Lennon in The Beatles Anthology

book, “All my contributions to the album have absolutely nothing to do with this idea of Sgt. Pepper and his band; but it works, because we said it worked, and that's how the album appeared. But it was not put together as it sounds, except for Sgt. Pepper introducing Billy Shears and the so-called reprise. Every other song could have been on any other album.” George Harrison agrees with this sentiment, “I felt we were just in the studio to make another record, and Paul was going on about this idea of some fictitious band. That side of it didn't really interest me, other than the title song and the album cover.”

The studio experimentation that began with Rubber Soul and continued on to Revolver came to a crescendo on Sgt. Pepper. They were using more instruments, tapes loops, sound effects, overdubbing and orchestration than they had previously all culminating in "A Day in the Life" a collaboration between John and Paul who traded lead vocals on track and with it's 40 piece orchestra with Paul and producer George Martin conducting.

Other albums by The Beatles on the chart: Meet the Beatles, A Hard Day's Night, Rubber Soul, Abbey Road, Revolver, and The Beatles (White Album)

“The Beatles insisted that everything on Sgt. Pepper had to be different, so everything was either distorted, limited, heavily compressed or treated with excessive equalization.” — Geoff Emerick (recoding engineer)